EwF launch in China, and the M8 1556 Huaxian earthquake

By Yu Zhou (University of Oxford)

This April, part of the EwF group (Professor Philip England, Professor Barry Parsons and Dr. Richard Walker from the University of Oxford; Professor Lena Dominelli and Dr. Katie Oven from Durham University; John Young from the Overseas Development Institute; and Timothy Sim from the Hong Kong Polytechnic University) organised meetings in Xi’an (Northwest University) and Beijing (Peking University) to discuss both geological and social issues with a wide range of Chinese bureaus and researchers. The two meetings brought together more than 60 people including representatives from government ministries and departments, international organisations and universities. The representatives have offered valuable suggestions on what the EwF project could do to cooperate with on-going work around earthquake risk reduction in China. 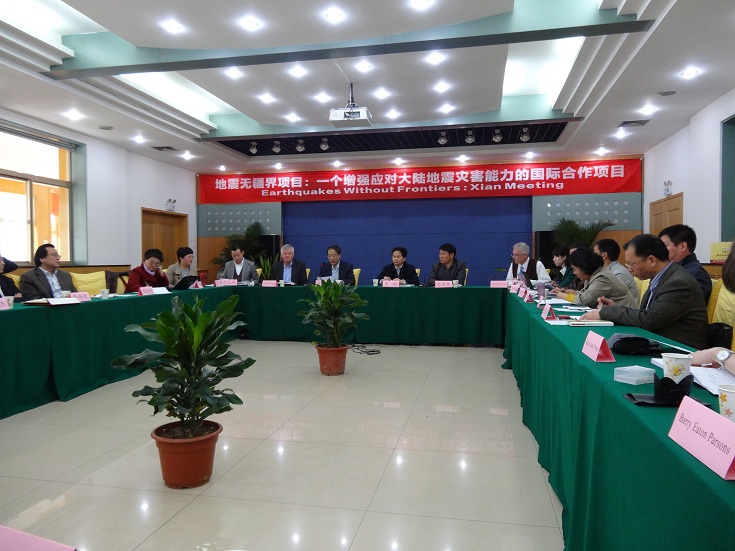 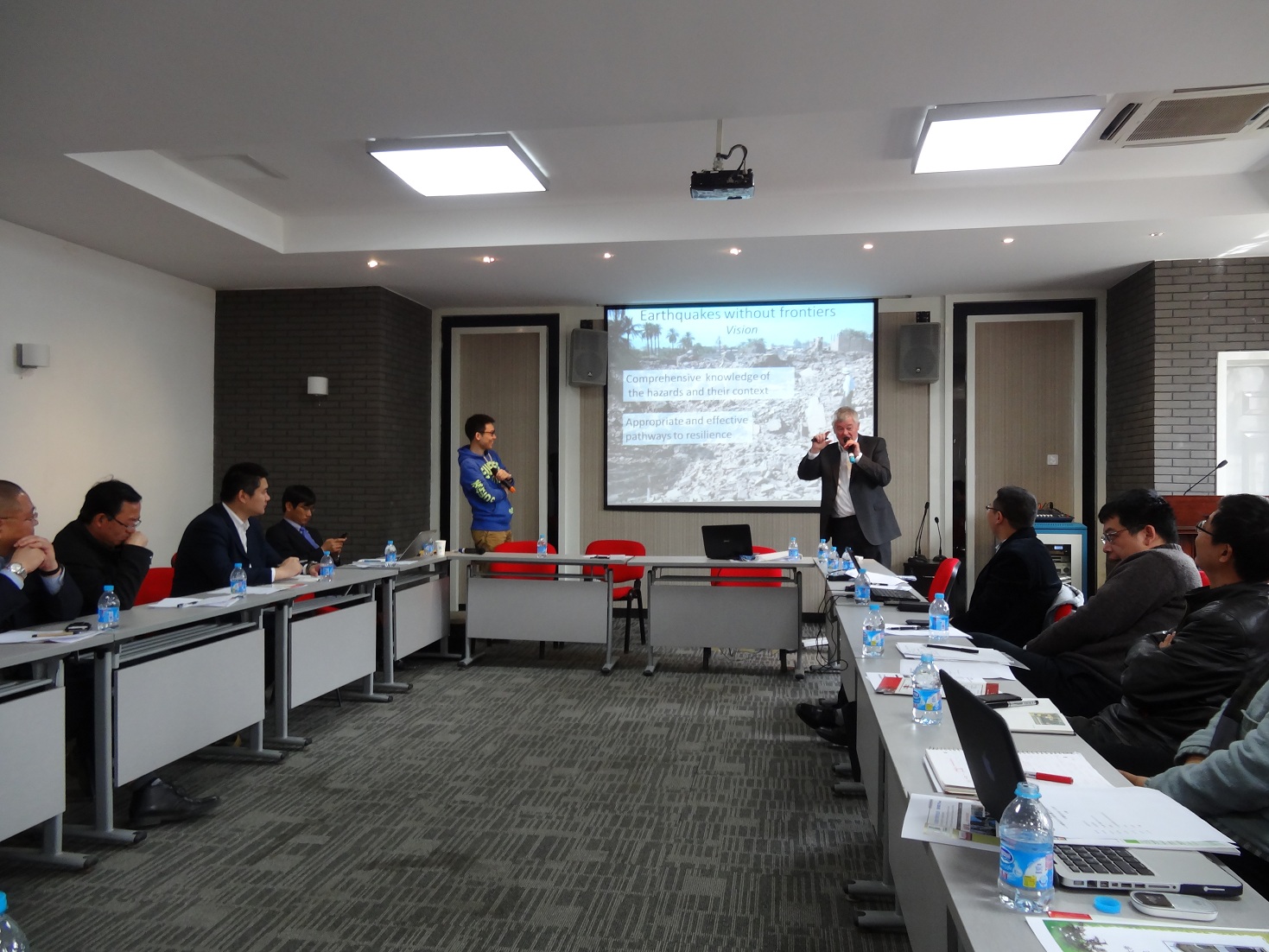 Following the EwF meetings, a smaller group of researchers (Dr. Richard Walker and Dr. Magali Rizza from the University of Cambridge; Ji Ma, a PhD student from the Institute of Geology at the China Earthquake Administration; and myself) spent five days doing reconnaissance fieldwork in Shaanxi Province, where the M8 1556 Huaxian earthquake occurred. This devastating earthquake was responsible for the greatest known death toll of over 800,000, and has aroused intense research interest as nothing is known of the earthquake recurrence intervals in this highly populated part of China. During this fieldtrip, we aimed to follow the surface rupture of the 1556 Huaxian earthquake, much of which has been mapped by Chinese geologists, and to determine the slip rates and past occurrence of earthquakes on the east Qinling fault, which runs along the southern boundary of the Ordos Desert. However, the dramatic modification of the landscape by human activities (e.g., construction and farming) in the past 400 years added challenges to the fieldwork. 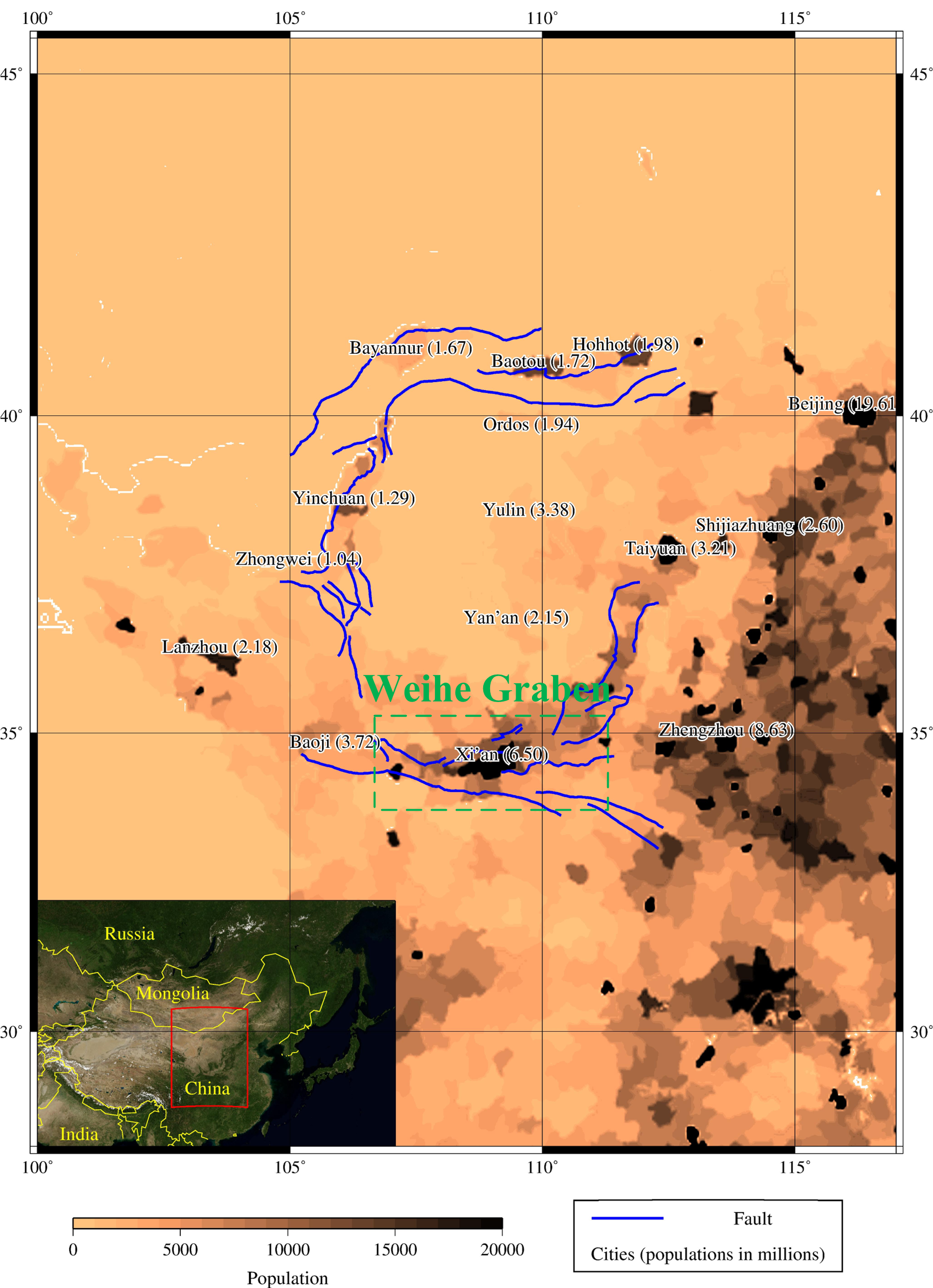 Figure 2. Populations in the Ordos Desert. The Ordos Desert is a rigid block with the Weihe Graben bounding its southern side. Xi’an, with a population of 6.5 million, is the most densely populated city in this region.

Guided by Professor Xijie Feng from the Earthquake Administration of Shaanxi Province, we visited a number of sites along the 1556 rupture. We were surprised by the continuous and consistent ~8 m scarp over the entire fault length. If the entire 8 m scarp is confirmed to be formed during the 1556 earthquake, the geological story of the Weihe Graben will bring new insights to active faulting. To unravel the geological truth, we collected samples for dating from river gravels that were uplifted in the scarp, and from ancient soil and loess layers that overlie gravels in the footwalls of the faults. We also found evidence for higher scarps, which may represent some pre-historic events. If the main scarp was indeed formed in the 1556 event, then samples from the same layer should give the same age, and the age of the samples from different layers may indicate the earthquake recurrence intervals. We hope to be able to calculate a minimum late Quaternary slip rate using the date of the samples and the displacements measured on high-precision and high-resolution digital elevation models (DEMs) from field surveys, photogrammetry and computer vision techniques. 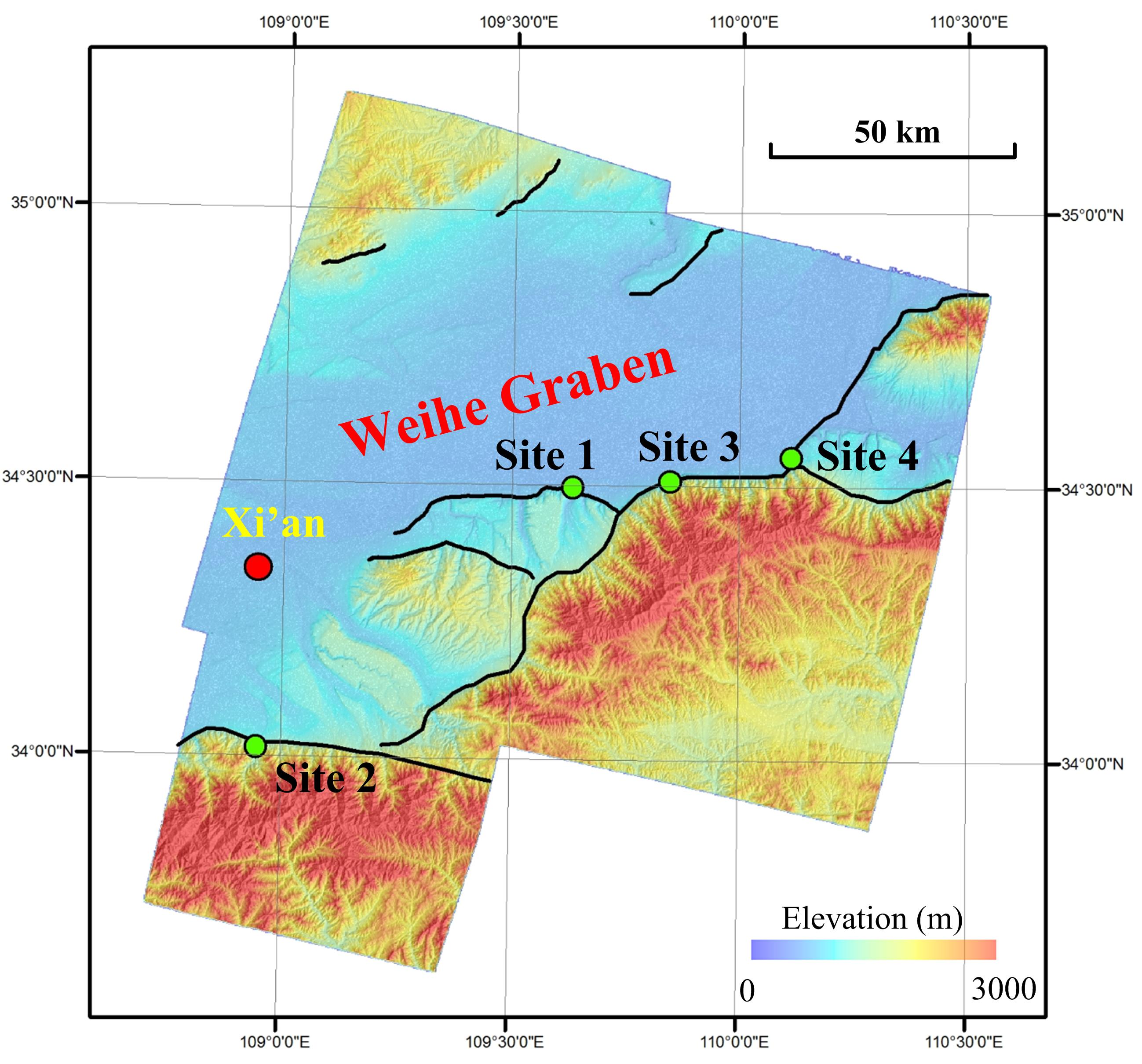 Figure 3. Field sites in the eastern part of the Weihe Graben. Base map is a 10 m resolution DEM which is constructed using 10 SPOT 5 images (2.5 m resolution), and point clouds from SRTM (90 m resolution) and ASTER GDEM (30 m resolution). 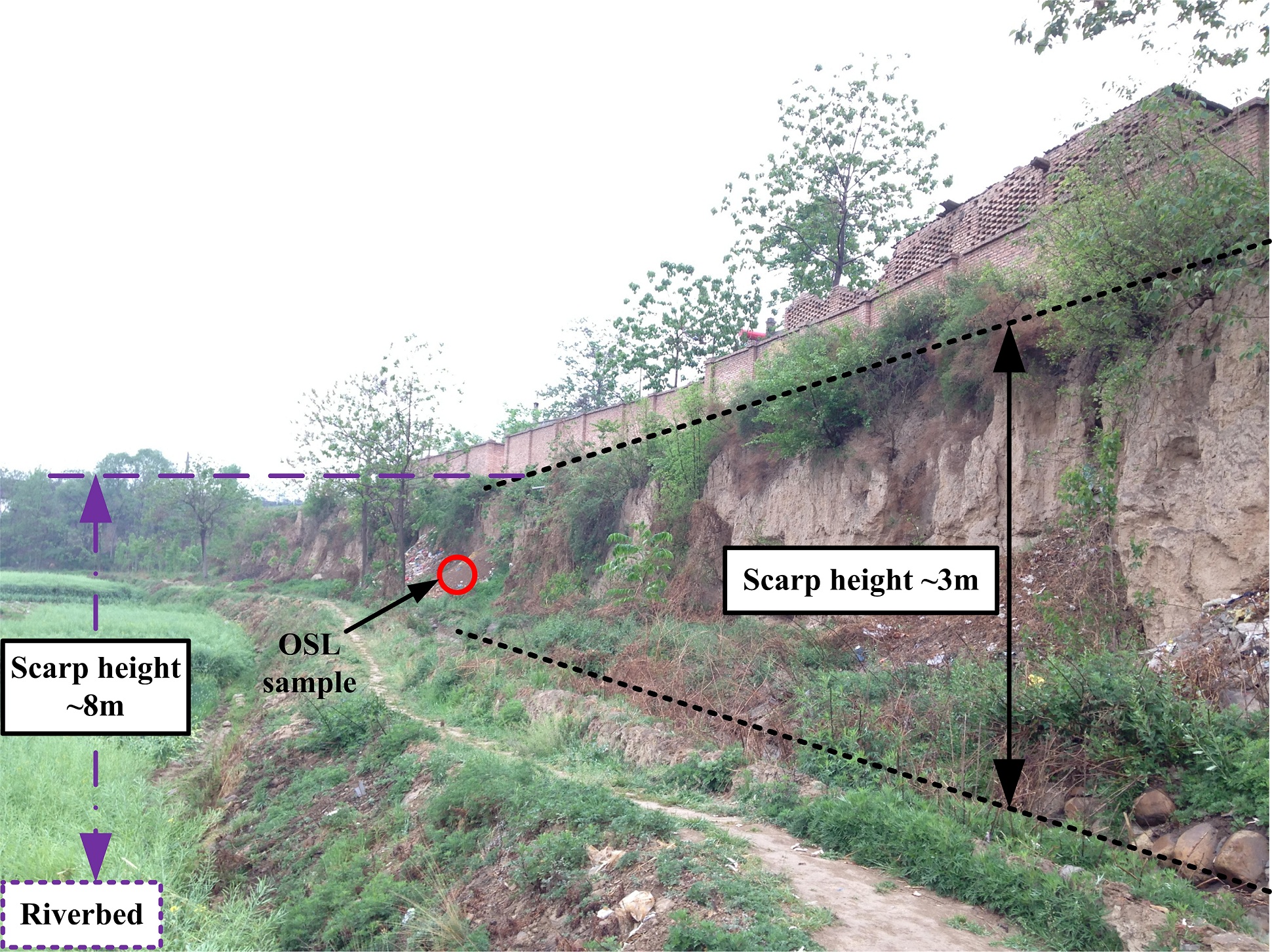 Figure 4. During the investigation, we saw a continuous and consistent ~8 m scarp over the entire fault-length. To test whether the 8 m scarp was formed in the 1556 earthquake, we collected samples for dating from the loess layers (red circle in lower photo).

The M8 1556 Huaxian earthquake is the most recent destructive earthquake in the Weihe Graben. The highly populated cities in this region (e.g., Xi’an and Weinan) have a significant influence on Chinese history and culture. The cultural heritage in this part of China is amazing. During this trip, we were lucky to visit some famous historical sites including the Terra-Cotta Warriors of the first Emperor Qin Shi Huang. Should earthquakes happen in the future, they will have extremely severe effects. Hopefully we are able to learn more on future trips to reduce seismic risks. 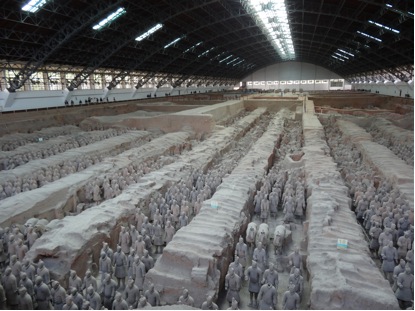 Figure 5. One pit of the Terra-Cotta Warriors in Lintong District (east of Xi’an) in Shaanxi Province. During this trip, we visited some of the historical sites around Xi’an. The Terra-Cotta Warriors were made in the late 3rd century BC to protect the first Emperor of China in his afterlife. The cultural heritage in this part of China is of great importance in Chinese history.

When was the last major earthquake on the Main Kopeh Dagh Fault in Turkmenistan?

Earthquakes without Frontiers is supported by the Natural Evironment Research Council (NERC) and the Economic and Social Research Council (ESRC) through the Increasing Resilience to Natural Hazards (IRNH) programme. © Copyright EwF 2013